The text of recently printed Interchange reports for Friends United Meeting are below, with the most recent at the top and older reports below. To jump to a particular report, simply click the link below. 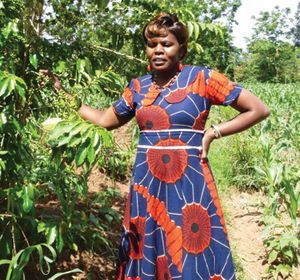 Margaret Amudavi, from Friends Theological College, Kaimosi visited our Annual Sessions and several monthly meetings in 2017. She and most of her family are among the lucky ones in East Africa during this pandemic because they have a mid-sized farm.

Margaret returned to her village home in Kimili, near Uganda after both of her schools closed. She is a part-time lecturer at FTC and a doctoral candidate at St. Paul’s University near Nairobi. Margaret has been planting corn, beans, and kale. The rains have been good. She also attends a few egg-laying chicks and hens and milk cows. Her family raises some tea and coffee to sell, but come harvest time they might not be able to get those crops to market.

For our African and Caribbean Quakers, who are not so lucky, Friends United Meeting has established the COVID-19 Solidarity Fund. Send contributions by credit card to this secure line: https://donorbox.org/covid-19-solidarity-fund. Send checks to: FUM, 101 Quaker Hill Drive, Richmond IN 47374 with “COVID-19 Solidarity Fund” in the memo. For many Friends food insecurity is already a major problem. For Quakers in Samburu, Kenya work-from-home orders mean no work and no food for those who are day laborers.

In Belize City, Central America, our school is in the poorest area. Schools have been closed but for many of our students the only food they got was the breakfast and lunch we provided. Nikki Holland, Director of Belize City Friends Center and her family visited our Annual Sessions last year. With our financial help, Nikki and her colleagues can give a weekly box of basic food stuffs to the forty Belizean families who are part of our Quaker work and witness in that city.

FUM launched a fabulous on-line bookstore! (friends-united-meeting.myshopify.com): The store has Quaker writings—both early and contemporary—and books on peace and nonviolence from Fox to Gandhi and from Ramallah’s Jean Zaru to Bethesda’s Dave Zarembka. The catalogue includes old classics from Howard Thurman and new books like Following Jesus Without Embarrassing God. Religious Ed committees will find books and workbooks for adults, youth, and children.

Kenyan Friends talk about challenges, not difficulties: Are we up to the challenge of Christian African Friends? Quaker Christianity became rooted in Kenyan soil over 3 generations ago. For many US Friends, when we think of Christianity we think the Spanish Inquisition, the Salem Witch Trials, and the current pedophile scandals in the Roman Church. For many Kenyans, Quaker Christianity means hospitals, schools, and opportunities for women’s leadership through the United Society of Friends Women International. Kenyans not burdened by Western controversies like predestination v. free will.

Over 40% of the world’s Quakers live in East Africa. They will be the dominant influence on the future of Friends for the 21st century. At Annual Session, I challenged us to begin discerning what part we want to play in the future of Quakerism. Now is the time to gather data for our discernment. We can begin by periodically checking the FUM website www.friendsunitedmeeting.org. In addition, we can sign up for the weekly and monthly e-news at the website’s contact page. www.friendsunitedmeeting.org/contact-us.html. We can think about attending the next Triennial meetings in Kisumu, Kenya, July 12-18, 2020.

For informal and in-depth challenging discussions, invite Georgia Fuller to your area (but not in March or April when she will be in Belize and Kenya). georgiafuller@gmail.com.

Georgia Fuller, Langley Hill
BYM Representative to the FUM Board

As Friends United Meeting steadily moves from an American missionary organization to a global partnership, new life is sprouting:

1) Years ago Friends in Cuba began preparing for the transition from Fidel Castro’s era. Anticipating that this transition might reveal restlessness, uncertainty, and even conflict, they began the Cuban Quaker Peace Institute. The first class was in January 2013. In spring 2016 the Institute graduated 12 certified mediators—just six months prior to the death of Fidel Castro.

2) Ramallah Friends Schools began in 1869 and has survived and thrived under 4 governments—Ottoman, Turkish, Jordanian, and Israeli. The Lower School just won the Green School Award from the local Municipality. Students practice water and electricity conservation and recycling. For those of us who struggle with the conflicts in Palestine/Israel, Ramallah Friends Schools offers us a Quaker way forward at www.friendsunitedmeeting.org/work-with-us.html. Apply or encourage another Friend to apply as the new Head of School, the Quaker Life Coordinator, or a teacher (one-year contract). Consider volunteering as a Friendly Presence (chaplain, 3-9 month commitment) or financially supporting a Friendly Presence.

3) Friends School in Belize has been a tiny institution with a big presence. It offers a second chance for students, who struggle in a poor and dangerous area of Belize City, to retake and pass the exams necessary to enter technical or college programs. The government and residents have asked Friends to expand this work. After three years of study, Friends United Meeting has bought a large piece of land with two structurally sound buildings that can be renovated for classrooms, offices, worship space, staff housing and a community center.

4) FUM has just hired Oscar Siema Mmbali to be our pastoral minister in Belize. His leading is to shepherd our Friendly presence in the school and community. Oscar is a graduate of Friends Theological College in Kaimosi, Kenya. FTC has just graduated a record 60 students with degrees ranging from chaplaincy certificates to diploma (2-year junior college degree) to a Bachelor’s of Theology.

Global Partnership comes to Wichita
Early registration for the FUM Triennial ends March 31, 2017. You do not have to be an appointed representative from BYM to meet and worship with Friends from around the world.

Friends United Meeting has been moving toward becoming a world-wide Quaker community of mutual respect and spiritual witness. In 2014 the General Board was divided into two regions—the North American/Caribbean and the African regional boards. The Executive Committee, which is comprised of members from both regional boards, meets regularly by conference call. Board members are encouraged to attend both regional meetings. For example, our June 20th meeting held in Gibara, Cuba, had fourteen Board members from the United States, two from Cuba, one from Jamaica, and two from Kenya. This meeting was another step in FUM’s vision of transforming from what began as a colonialist, missionary organization to a global partnership of faith and practice.

After years of semi-isolation, our Cuban Friends were overjoyed that, for the first time, the FUM General Board had come to them! Quakers came to Cuba’s shores in 1900. Cuban Quakers greeted us with welcome signs, balloons and freshly painted, newly air-conditioned sleeping quarters. The two large churches in Cuba have water purification systems and they share this safe water with their neighbors. They also share food, medicine and other household items. They recently established the Cuban Quaker Peace Institute, which has just graduated twelve certified mediators. (The full report is in the minutes of BYM’s 2016 Annual Session.)

40 Days of Prayer for the Future of Friends

Friends United Meeting invites Friends everywhere to meet together in the Spirit to contemplate how Friends are called to be a vital, dedicated movement for good in the world. Starting October 10, this can include queries, guided devotional exercises, and small-group gatherings. For more information, contact FUM. (765-962-7573 or info@fum.org) On the web, see www.fum.org/about/40DaysofPrayer_2012.htm.