The text of recently reports for Maury River Friends Meeting in the Interchange are below, with the most recently published at the top and older reports below. To jump to a particular report, simply click the year listed below.

In response to an idea from BYM, this year we are offering Quaker Peace and Justice Awards to local students from 14 to 18 years old. We are asking them to use 500 to 700 words to write their vision of a more positive world looking forward into a future that might be possible 30 years from now. “What steps would you take to achieve this future and how can you inspire and work in community with others?” In order to encourage more to apply, we are offering are $300, $125 and $75 for 1st , 2nd and 3rd place respectively (instead of a Scholarship for college). The deadline is Earth Day, April 22nd. We are using our Maury River Friends Meeting website (through Quaker Cloud) so we feel that we are communicating about Peace and Justice and Quakers including Maury River Friends Meeting. 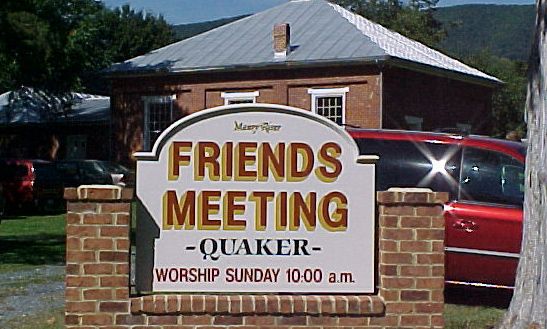 The House and Grounds Committee facilitated a second hour this past winter that considered the report written by Eli Fishpaw on the energy use of the Meeting. It appears that there is a great deal of interest and concern regarding our use of resources.

It is agreed that the biggest energy use is caused by Friends commuting to the Meeting House. While some time in the future Maury River Friends may choose to relocate to a more centralized location, the present Meeting House is where Friends’ community and worship are currently flowering, and there is no clear leading to relocate. Some good suggestions for carpooling or busing have been made, but since these are not directly associated with the building, House and Grounds has chosen to leave that organization to others.

The Meeting House poses particular issues for reducing energy use, as it is only used for a few hours each week. This means that major investments in infrastructure would only yield a slight decrease in energy consumption. The Committee feels that we have decreased energy use to what is plausible for comfort standards, making extensive use of thermostats and timers. We then have begun looking at electricity production, and quickly determined that neither wind nor water generation are suitable for our situation. There are, however, at least two households in Rockbridge County, including the residence of Mel Leasure, where photovoltaic systems have been hooked up to the grid and are producing electricity. Electricity that is not immediately consumed by the household is absorbed by BARC Electric Co-Op and a credit is then created to be used during periods of high consumption. This eliminates the need for storage of the electricity on site, which is a problematic endeavor. House and Grounds then turned to Eli again, this time to consider the photovoltaic potential at the Maury River Meeting House.

Eli determined that the property has suitable locations for a solar array. This would be somewhere in front of the Meeting House, either close to the power line or on the creek edge near the shed. A 2.15 kw system is 30 feet long and would supply rough half of the Meeting’s annual usage. The length can be doubled or another row can be installed above it to double production. If we chose to install one unit, a second one could be added on later. Figuring the cost of this array is complicated. We recognize that there are several concerns about this site, including aesthetics, play area, right of way, and security. We consider these to be additional costs of the system. Other variables include the system size and the cost for installation. Hiring a contractor doubles the price of installation, while hiring local talent may or may not be an option. The federal government currently offers a 30% tax credit for renewable energy, however, this does not apply to non-profit organizations. We would need the advice of an accountant or tax lawyer to begin to access this support.

Paying for a photovoltaic array would be a challenge for Maury River Friends Meeting and would require some creative solutions. It is possible that a loan to the Meeting could be paid off with the money that we are currently paying to BARC for their coal generated electricity. While it might take 30 years for the photovoltaic system to pay for itself at current prices, it is likely that the cost of energy will continue to rise, making our system increasingly economically neutral or viable. Other cost benefits of a photovoltaic system include withdrawal of support for mountain top removal and the resultant environmental degradation, as well as a public witness of this Meeting to our deep spiritual concern for our planet. House and Grounds suggests that photovoltaic electricity generation could in the end be found to be economically advantageous or at least cost neutral.

This past summer, three of our Young Friends, Silvia and Laurel Sheffield and Maya DeHart, asked one of Maury River’s treasured educators, Elise Sheffield, to lead them in a study of the Bible, as was done sporadically during the busy school year. As emerging members of society, they felt a real disadvantage not knowing more about Biblical references encountered in daily and academic life. They decided to meet twice a week, eventually meeting 7-8 times, with these rules: each session was limited to an hour, they would have food, and they would meet at different locations (such as the coffee shop). No preparation was required (except by their teacher!) and each student brought her own Bible. They studied Genesis, Exodus, Ten Commandments, some of the more sensational stories, laws, Prophets, Psalms, Ezekiel, Song of Solomon, Prophets, Gospels, Church history, and letters. Their approach was fresh and they all found their project, which came to be called the Bible Revival, to be great fun and quite enriching.

Maury River Meeting is delighted to welcome two new members. Judith Wiegand has transferred her membership from Palm Beach MM, and long time attender Eli Fishpaw has now become a member. We were well represented this year both at Annual Session and at the Gathering at the University of Rhode Island. 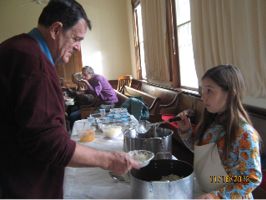 On November 18, Maury River gathered after rise of Meeting for a Simple Meal. We recall this intergenerational fun having been held among us for at least 10 years now, with some early Young Friends organizers 2 years past college age now. With the children doing much of the work, 40+ were with us and raised a nice donation for Heifer International. 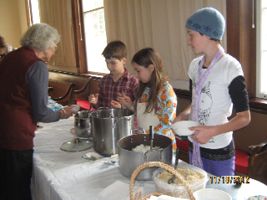 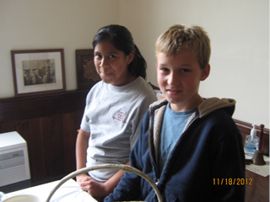