Our Meeting has been changing in many ways. Alexander Griest passed away 8 Sixth month, at age 85. Al was a gentle presence, who spent his retirement years attending to the Meeting Houses and Burial Grounds with care. Mary and Mike Gemmill moved to the Brethren Community at Cross Keys during Ninth month. While they endeavor to attend Meeting for Worship most First Days, Mary rarely travels weekday evenings to participate in our ESL program. Member Vicki Rourke has returned to the area after years in Indiana, and we have a new active attender, Daryl Hewitt. So our Meetings for Worship have taken on a different, younger complexion. Chris Fee assumed the role of Clerk of the Meeting effective Seventh month. We appreciate his willingness to serve, and graciously thank Mary Gemmill for her many years of devoted service.

Meeting is making changes to our by-laws to indemnify members in the case of tragedy, and finds that the 40+ year-old by-laws require numerous other changes. We expect this process to take time, and ask our Meeting for grace in and patience with this process. Our reading group finished reading Michelle Alexander’s The New Jim Crow and began reading Doug Gwyn’s A Sustainable Life. Both books have been a part Baltimore Yearly Meeting’s annual book read in recent years. The reading group, while small, has allowed participants to know each other better as spiritual kin.

Our outreach to our Hispanic neighbors continues. We mourn the loss of Jorge Perez-Rico, who died this summer. Jorge was a tireless advocate who served the Hispanic and Anglo communities alike for decades, supporting our ESL program in the process. Our ESL classes continue for their third year, serving new and returning students alike. Pursuant to recently enacted Pennsylvania legislation, tutors working with children have completed training and background checks. Additionally, we provide childcare only to children of students present at any one session.

Menallen Friends Preschool, in its 42nd year, has full enrollment this semester. We expect some changes to the Preschool to come as a result of the by-law revision process, but don’t yet know what those changes are. We have increased our assistance with a weekly backpack meals program, John’s Meals, which serves the Upper Adams School District at Arendtsville Elementary. 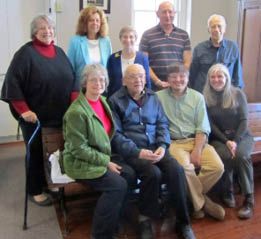 Menallen Monthly Meeting is a small, vibrant Meeting located in the beautiful fruit belt of south central Pennsylvania. We have operated a Friends Preschool for over 40 years, and offer ESL classes twice a week to our neighbors that work in the orchards. What Meeting can say that many of its participants come to the Meeting House two to three times a week?

We also have three historic Meeting Houses and five Burial Grounds under our care. So we’re having a workday at the Menallen Meeting House and Burial Grounds on Saturday, September 20th, from 10 am to 3 pm. We will provide lunch, with homemade fruit pies for dessert. We have lots of work to do: painting, pruning, brush removal, lawn care, driveway repair, and minor maintenance and repairs. We will provide equipment and materials, but if participants wanted to bring work/painting clothes, pruners/loppers, and perhaps a sturdy extension ladder, we would welcome that. Apple season will just be starting and farm markets abound. Pine Grove Furnace State Park, the Appalachian Trail, and Gettysburg National Military Park (or just the touristy stuff in Gettysburg) are nearby, and we could arrange rooms for anyone who wanted to make it a weekend and worship with us. We can offer overnight accommodations with prior inquiry. Contact Dave French at aardlyquaking@gmail.com, or 717-677-6781. Please RSVP if you can, so we know how much food to prepare, and what tools to line up. But please come even if you weren’t able to reply.

Menallen Meeting Reaches Out to Community after Shooting

Rae Tyson, Menallen Meeting
When 19-year-old Shiphod Brown was shot and killed on the streets of Gettysburg, last summer, several members of Menallen Monthly Meeting were saddened by the loss of another life. She had been shot by a young man with a handgun as she sat in her car.

In true Quaker fashion, the member carried their grief to the Meeting House the next First Day. The issue was raised in an informal discussion at the rise of Meeting. The message was simple and direct. Isn’t there something we can do or say about gun control in our community? Though many agreed that Menallen should reaffirm the Quaker position of non-violence, there were concerns raised about taking a stand that might offend the law-abiding hunters and sportsmen in Adams County.

The issue was set aside until the next Business Meeting. After a period of silence, the discussion led to a need to discuss the issue in another context. Meanwhile, members were asked to express their thoughts in writing. Six did so and the issue was set aside until a Called Meeting in December. When Clerk Mary Gemmill convened the Meeting, the options ranged from letters to elected officials or to the editor of the Gettysburg Times. As they sat in silence, one member looked out the window of the Meeting House and saw an eagle perched nearby. The eagle sighting was an inspiration, leading the member to suggest a low-key Christmas greeting that would reaffirm the Meeting’s stand regarding gun control and non-violence. It was further decided that a paid ad would be more effective than a simple letter writing campaign. Throughout the process, the Meeting was guided by the Friends Committee on National Legislation’s policy statement regarding gun control and non-violence.

A message of Peace and Mediation was approved and published on Dec. 21, 2012. It appeared in the Gettysburg Times one week after the tragic school shooting in Newtown. The simple message transformed a local concern into one that mirrored the growing concern about gun control nationwide. The ad brought immediate expressions of support from the Gettysburg area community. Now, the challenge for the future will be how to take further steps towards curbing gun violence in our country.

Menallen Friends now offers Meeting for Worship at Huntington Meeting House at 10:30 am on the first First Days and at Newberry Meeting’s Redland’s Meeting House on the third First Days at 10 am during warm weather months. There is Meeting every First Day at the Menallen Meeting House with potluck on the second First Days. All are welcome. We have named a scholarship to the Menallen Friends Preschool in honor of our retired treasurer, Peggy Fisher. As part of our outreach program it was awarded to a student from the Lincoln Intermediate Unit’s migrant education program at La Escuelita. Our summer began with a successful reunion of the Blackburn Family at Menallen whose ancestors were instrumental in establishing the Meeting in the 1750’s. We rounded out the summer with a history/arts camp for children and a peace concert featuring young musicians from all over the world.

Menallen Monthly Meeting is pleased to announce that Redlands Meeting House in Newberrytown, PA will reopen for worship this spring, beginning on Easter Sunday in April and continuing on each third First Day through October. It will be the first regular worship at Redlands in 150 years. Menallen was approached last year by several members of Warrington Monthly Meeting regarding the possibility of activating Redlands for worship during warm weather months. Menallen graciously agreed to the request. The well-preserved, historic Meeting House was built in 1811 and laid down in 1862 because of declining membership. The Redlands Meeting House has been under the care of Menallen ever since. Both the interior and exterior of the Redlands remains as it was in 1862. The Meeting House and furniture is remarkably well-preserved. It also remains without electricity or running water. The sole sources of heat – fireplace and wood stove – are currently not functional. Inside Redlands, the hand-hewn wooden benches and fireplaces are as they were 200 years ago. Outside, grave markers in the cemetery provide visitors with a genealogical tour of this historic Quaker landmark.