The bright yellow image could be a child’s fantastic drawing of a dragon. In fact, it’s only one of many bizarrely drawn electoral districts in Pennsylvania—an all-too-real example of gerrymandering. It is the kind of political monster that Carlisle Quaker Meeting believes must become extinct before people with different political views see any reason to seek common ground on controversial issues.

Gerrymandering is the practice of drawing voting district maps to favor or discriminate against a political party. Both major parties have done this. In Pennsylvania maps drawn by Republicans created so many “safe” districts that in the 2018 elections more than one-third of the state’s 203 House seats were not even contested. Almost as many more were won by lopsided majorities—more than 20% differences between winners and losers. Only 17 contests (about 8%) were close enough so that a 3% shift in voting would have changed the outcome.(Source: en.wikipedia.org/wiki/2018_Pennsylvania_House_of_Representatives_election.)

Maryland Democrats have been equally guilty, as anyone can see by Googling “Maryland Congressional districts” (en.wikipedia.org/wiki/Maryland%27s_congressional_districts). 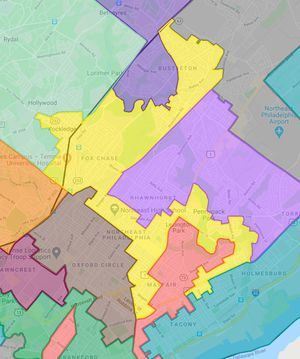 “Gerrymandering,” says a minute approved by the Carlisle Quaker Meeting, “reinforces extreme partisanship in Pennsylvania politics, making it harder to find non-partisan ways to address issues of social justice, education and climate change. … We do not believe that politicians of either major political party can be expected to draw electoral maps fairly. Therefore, we favor having maps drawn by an independent commission whose decision-making criteria and proceedings are readily available for public scrutiny.”

Carlisle Friends believe that ending gerrymandering is a key response to the Yearly Meeting Session query: “How do we move beyond our divisions and find common ground for moving forward?” Gerrymandering reinforces extreme partisanship. That’s because in safe districts, major party primary elections are the only elections that matter, and the small percentage of voters who have the most doctrinaire views are the ones who turn out for primary elections. Of course, voters who are neither Democrats nor Republicans (Greens, for example) have no voice at all.

The Carlisle gerrymandering minute urges Friends to work with other faith-based groups to combat gerrymandering. We appreciate that many BYM committees and working groups labor on more highly focused issues of peace and social concerns. But much of this advocacy is wasted wherever elected officials have no need to reach out to voters beyond their own narrow political “base.” Until we change how electoral maps are drawn, nothing else is likely to change very much.

Carlisle Quakers oppose the practice of gerrymandering—the creation of voting district maps in order to favor or discriminate against a political party. Gerrymandering reinforces extreme partisanship in Pennsylvania politics, making it harder to find non-partisan ways to address issues of social justice, education and climate change.

We believe that voting districts should, to the extent possible, be geographically compact, approximately equal in population, and aligned with city and county subdivisions. We do not believe that politicians of either major political party can be expected to draw electoral maps fairly. Therefore, we favor having maps drawn by an independent commission whose decision-making criteria and proceedings should be readily available for public scrutiny.

We encourage our Meeting clerk, the clerk of our Faith in Action Committee, and our members and attenders to publicize our opposition to gerrymandering and our support for non-partisan alternatives. To this purpose, we encourage communications with elected officials, as well as use of print and social media. We also encourage dialogue with other faith-based organizations or advocacy groups to consider the extent to which elected officials appear to feel any political pressure to take their concerns seriously.

Carlisle Meeting has been able to provide hospitality to Friends who were trekking across Pennsylvania for social justice. We provided dinner, breakfast and overnight lodging for EQUAT walkers who were walking from Philadelphia to Pittsburgh to protest PNC Bank providing loans to mining organizations who were practicing mountain top removal. Later we provided overnight and meal hospitality to Jesse-Blue Forest, from Charlottesville Monthly Meeting who plans to walk across the country to the Pacific Ocean. He was walking to urge citizens to support legislative action to abolish the Selective Service System in the United States.

A group of Carlisle Friends has been reading and studying Conversations With Christ by Douglas Gwynn, and meeting biweekly for discussion and meditation. In our discussion of the transfer of membership to Carlisle of the Fisher family which includes three children Carlisle Friends considered the process of designating children of active members as birth-right Friends. Carlisle Friends lacked a sense of the Meeting concerning this designation. Baltimore Yearly Meeting Faith and Practice does allow it, while the Revised Faith and Practice does not have a provision for it. The Fisher children were transferred as associate members. Karen Anderson and Horst deLorenzi and children Lars and Hanna are transferring to State College Monthly Meeting. Pegi Siegel transferred to Medford Monthly Meeting (New Jersey.) On August 26, Friends enjoyed worship, picnic and singing in a nearby park.

When Carlisle Friends bought an aging church in 1993 we saw possibilities for it to become a serviceable Meeting House for us. Certainly the price was affordable even when we included the most necessary improvements. So we settled in to pay the mortgage, and after fifteen years we paid it off. Then we turned to major projects which had been postponed until funds were available. With no more mortgage payments, we were able to proceed. We took down a rotting steeple, sold the bell, repaired the roof, repaired damaged windows, put in a new furnace with air conditioning, and remodeled the entrance. Of course, we have become aware that the list is endless. But the biggest jobs are complete, so come visit us.

In the midst of all this activity we sponsored Quaker Quest. We had a few visitors, most of them people who were very active in their own churches, who came to us to learn who Quakers were. We did not get any new members but the in-reach was meaningful to us as a faith community. Then in 2011, a year since, we have seen an influx of visitors, several of whom have become regular attenders. What happened? We think maybe the advertising of Quaker Quest informed people of our presence. Certainly a new and improved web site has helped notify the public.

Carlisle Friends are seeing our youth mature and leave Carlise for education far and wide. With a smaller First Day School we faced the problem of an isolated teacher and only one child attending. We are very grateful to the Yearly Meeting’s response to our cry for help. We are following the lead of several of the Meetings who replied to our pleas. Now we have regular attenders who are willing to join the “class of two” to prevent possible accusations of abuse. We keep a record. So far this is working.

Carlisle Friends are involved with studying and plans to purchase a new furnace and air conditioner for the Meeting House. We are grateful that the oil burner and the large window air conditioners that were part of our building when we purchased it in 1993 have continued to operate since we moved in. The decision to pursue this improvement was motivated both by our understanding that the current equipment is well beyond its life expectancy and by our desire to make our Meeting House much more energy efficient. The Property Committee is close to a decision among the three bids we have been given, seeking the wisest choice concerning both price and quality factors.
One of the highlights of recent months was our Christmas coffee house which included musical, dramatic reading, story and commentary offerings. In a more serious vein, we were stretched and deepened with a series of four meditative second hour sessions with music led by Ruth Fitz and sharing led by David Fitz of York Monthly Meeting. Friends started to fulfill our desire for more music in the meeting with Don Kovacs and Morgan Evans leading us in song. Friends have mentioned hoping this program continues. Carlisle Friends Don Kovacs and Sherri Harper McCombs and Sandy Grottburg of Chambersburg Meeting (PYM) visited the St. John’s Episcopal Church in Carlisle to lead a lively discussion of the peace testimony.