The text of Patapsco Friends Meeting reports in the Interchange are below, with the most recently received at the top and older reports below. To jump to a particular report, simply click the year listed below. 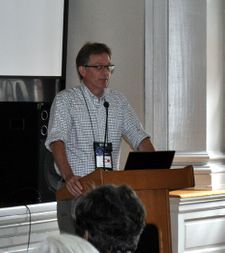 Courage, Faith and Hope to Love Across Our Differences
Patapsco Friends have a longstanding prison ministry that has taught us much about our spiritual kinship with people we might have thought were just too different to befriend or understand. The prisoners and ex-prisoners we have come to know and care about have often been through things that are outside our experience and some have committed acts that, had we known about them before we came to know the people as they are today, might have closed our hearts. But the Spirit doesn’t throw people away, and hope can be kindled in dark times. Our connections are strong, the love is there, and each of these men is a valued member of our spiritual community.

Many of us have also participated in “Courageous Conversations.” For four evenings in February small, interracial, interreligious groups (totaling about 400 people) discussed our experiences with bias. We approached the topic of differences from the shared hope that, by listening to each other, we could all grow and act from a deeper understanding of our own biases.

Patapsco recently welcomed another returning citizen who was a member of the South Mountain Fellowship at the Hagerstown, Maryland correctional center. Only one member remains at the correctional center, which has been downsizing, so our role is now corresponding with members transferred to other institutions and helping them transition when they come home (a joyful responsibility). Perry is now housed and working, and we have welcomed our friend and his young son at Patapsco. Another returning citizen, Gabe, also received permission to travel within Maryland and was welcomed to the Meeting. In November we celebrated the birthday of a third friend, Andre–his second birthday at the Meeting. We continue to learn from these Friends and are grateful to have them join us in worship when they can. We are finding that the first couple of weeks are critical for returning citizens, and transition plans made by the correctional centers vary in quality. If people are able to get the support they need for this critical transition, research shows that the likelihood of recidivism is greatly reduced. We also continue to be enlightened by a series of presentations by members on Quaker “luminaries.” Recently, many of us heard for the first time about Landrum Bolling, a truly remarkable Quaker whose quiet diplomacy was placed in the service of Mideast peace. He died this year at the age of 104 after an active life that included courageous service as a war correspondent and helping to found the Earlham School of Religion. You can find a handout on his life on our website: patapsco.bym-rsf.net/files/2018/12/Landrum-Bolling.pdf

We often underestimate the power of giving voice, but it is real and sustaining. It works its healing not so much by being heard, as by the fact that in giving voice to what lives within, even through the softest whisper, we allow the world of Spirit to soften our pain.

Mark Nepo, The Book of Awakening

Patapsco Meeting is laying down our 12-year ministry at the Maryland Correctional Institution (MCI). MCI is downsizing and all of our regular attenders but one have been transferred (or, in one happy case, released). We held a final celebration with our one remaining member in which we recalled and held in the Light each of over twenty men who have been part of the South Mountain Fellowship over the years. Three have died, two after being released and one while incarcerated; the others are all at other institutions now. We have kept in touch with many of them through subscriptions of Friends Journal and pen pals. Patapsco plans to provide some limited financial support and spiritual fellowship as others who have been part of the South Mountain Fellowship are released. We have invited our one final member of the Fellowship – the one who has been with us the longest – to write a final minute. Friends said they were disciplining themselves to pay attention to the present to things that matter besides pressing social concerns–for example, loving family and enjoying music. The negativity is hard to bear, and many of us are seeking way to counter messages of fear with hope. It is also helpful to remember we don’t know the future. For now, we seek activities we can support that help build the blessed community. As a Meeting, we have been reading and discussing the book Active Hope. We have had two sessions so far and find it encouraging, realistic, and helpful. We look forward to our annual retreat in May, which will be led by Marcelle Martin. Some of us had the joyful task of picking up one of our members and delivering him to a new home where he will receive support in the transition to community life. This man, who had been in prison about 25 years, had the blessing of a caring and committed social worker who worked diligently to place him somewhere he could afford that would offer the care he needed. Many have no such luck and are simply taken to a bus stop to summon a taxi. Patapsco has had two sessions in which we shared with each other our experience and leadings in these challenging times. Most recently, we had a worship sharing session in which people shared:

In November, Patapsco joyfully celebrated its 20th anniversary. We welcomed back several founding members and early attenders who had moved away. We remembered how a founding member went on a tour of historic houses in Howard County and discovered Hebron House, a lovely farmhouse which we now happily rent from the Presbyterians who own it.

Friends explored queries about our relationship to the Meeting. In worship sharing, we each sought to express: What has Patapsco Friends Meeting meant to me? When have I felt at home at Patapsco Friends Meeting? How have I participated in co-creating the community? What are my hopes for Patapsco Friends Meeting? A founding member observed that Patapsco had “started from scratch” and took nothing for granted. It was a “learning meeting,” opened to new lessons. People didn’t want to do things automatically as they had been done in the past. A former clerk recalled how the Meeting was challenged by the crisis of 9/11 and found its way forward together, as she hopes we will in honoring our values today. Another Friend experienced the Meeting as open to hearing and doing what Spirit asks, giving the example of our prison ministry.

Many Friends described their sense of finding a home and a warm welcome at the small, “right-sized” Meeting where people can “know each other and be known.” One said it has an “old soul feeling.” We told stories about the treasured children who grew up in the Meeting. Some Friends spoke of finding a place where they could safely speak of difficult challenges they were facing in their families, such as mental illness. Small group activities, such as reading The New Jim Crow and regularly discussing Pendle Hill pamphlets, have helped Friends “know each other in that which is eternal.” One Friend found the Meeting a place where “people have each other’s’ backs, in spiritual growth and also in a practical way.”

Seeing darkness ahead, a Friend stressed the need to continue to co-create community as we continue our spiritual journey. We will need spiritual and emotional help. We will also need to face the challenge of seeing how best to relate to those who do not share our values. It seems an especially good time to be reading Joanna Macy’s Active Hope together.

In the past twelve years, we have all been touched by the Meeting’s prison ministry. In 2017, some present and former members of the South Mountain Friends Fellowship will be leaving prison, two of whom expect to be near us in the Baltimore area. We are acutely aware of the difficulties of this transition and will provide support where we can. As this report is written, we are stunned by the sudden loss of a beloved member of the South Mountain community, Monroe Wright, who died of a heart attack the night before our Christmas gathering on December 10. It is hard to take in, yet it felt right that we all heard the news together (from one of the correctional officers who had taken him to the hospital) and could honor his memory in an impromptu memorial service. Monroe was a kind, perceptive, thoughtful man who loved reading and studied meditation. He refused parole because he would have to admit regret for a crime he says he did not commit. Despite this, he actually expressed gratitude for his time in prison and never stopped growing and learning. The fellowship meant a lot to him, and he meant a lot to each of us. We will miss him. Goodbye, Monroe. 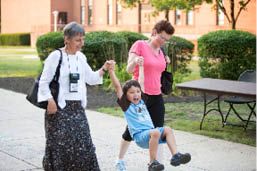 Patapsco Meeting enjoys an annual retreat planned by a committee or group within the Meeting, and this year’s retreat was a refreshing exploration of meditation as a spiritual practice. Thoughtfully planned by members who meet periodically to share meditation before Meeting, we learned about different kinds and applications of meditation from speakers within and beyond the meeting. After viewing the powerful documentary “The Dhamma Brothers,” about Vipassana meditation in the prison system, we learned about Vipassana meditation. A practicing Buddhist spoke to us about “staying present in difficult relationship interactions.” Our newsletter editor followed up by inviting us to write for our meeting newsletter about our meditation practice, and several of the men in the South Mountain Fellowship, who live at the prison in Hagerstown, submitted powerful articles. One wrote: “Today, I use meditation to reduce the tension, anxiety and stress of penal life. It clears my thinking and I become less angry towards people who have disappointed me and physically hurt me in the past.”

Many meeting members read “The New Jim Crow,” an experience that, combined with our prison ministry, has led to a deep commitment in many members to contribute to prison reform. A group of Friends continues to meet monthly to seek the way forward. Others of us have joined an alliance of organizations led by members of Annapolis Friends Meeting that is working on prison reform in Maryland and plans to work with legislators toward change.