1940s Recording of Native American Songs Produced by and for Friends 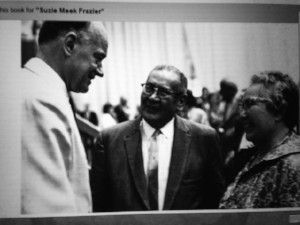 Explanation and Short History: The record was commissioned in the 1940s by the Associated Executive Committee of Friends on Indian Affairs (AECFIA) to raise money for their activities. By 1949, according to their annual report, sales brought in $12 (equivalent to $120 today). Musicians featured on the record are two Native Americans who were Quaker missionaries in Hominy, Oklahoma from 1947-1956. Francis Philip Frazier and his wife Susie Meek Frazier (shown in photo, right). Francis was a Sioux, a professional baritone, as well as a Congregational minister and a recorded minister of the Religious Society of Friends. After Oklahoma, he became supervisor of the Sioux Indian Mission of Standing Rock Reservation. Susie Meek Frazier, from the Sac and Fox tribes, was a trained musician who attended Haskell Institute and graduated from Earlham. They do a ceremonial song or hymn called “Dakota Odowan”, and a duet, “By the Waters of the Minneonka.” (Digitally transferred by Strickland Bonner, Turnkey Podcast Produtions, and IAC member Dellie James.)

BACKGROUND: The AECFIA was set up in 1869 during the Grant peace program era to oversee the work of the Orthodox Friends who went to be Indian agents in the west. It was an era of concern for Native Americans, who faced many difficulties after the Indian Removal Act of 1830. Quakers had appealed to the newly elected President Grant to replace the existing corrupt and brutal Indian agents with agents of “high moral character” who could live with the Indians. Previous Quaker work and good relationships with Native Americans may have helped Grant decide to use Christians as agents, including both branches of the Religious Society of Friends. Orthodox Friends were responsible for 10 of the 73 agencies overseen by Christian denominations, and Hicksites were responsible for 6. Orthodox Friends were given responsibility for the agencies in Kansas and Indian Territory that served the Potawatomi of Kansas, Kaw, Kickapoo, Quapaw, Osage, Sac and Fox, Shawnee, Wichita, Kiowa, and Upper Arkansas). Hicksite Friends were assigned agencies throughout Nebraska serving the Great Nemaha, Omaha, Winnebago, Pawnee, Oto, and Santee Sioux.

Quakers from the BYM area – both Hicksite and Orthodox – went to live with and assist Native people in the western territories for a number of years. (Orthodox Quakers included people from elsewhere in the US.) Considerable funds and goods were donated as well. Hicksite Friends formally relinquished their responsibility for the Indian tribes in 1878, after a non-Quaker was assigned to an agency position, raising fears of policies less sympathetic to Native Americans. Orthodox Friends, who considered themselves missionaries, stayed on long after the peace program era ended. As volunteers or on poverty wages, they built and operated needed facilities as well as churches. They also ran boarding schools, and learned Indigenous languages. In 2000, the Associated Committee had a budget of over $200,000, and its work was respected and the fund was contributed to by Yearly Meetings, including Baltimore, Philadelphia and New York Yearly Meetings. When the AECFIA dissolved in 2008, it was still sponsoring centers for the Mowa Choctaw in Alabama, Mesquakie in Iowa and the Kickapoo in Oklahoma. The two BYM Yearly Meetings, split in 1828, did not fully come back together until 1967. However, the two parallel Indian Affairs Committees began to cooperate in 1958, when the Monthly Meetings of Stony Run (Hicksite) and Homewood (Orthodox) united to work on Indigenous issues. In the late 1960s, they worked together to assist Native Americans living in the community. A daycare evolved into the Baltimore American Indian Center (BAIC), which opened in 1968.